Lung cancer is a type of cancer that begins in the lungs. Your lungs are two spongy organs in your chest that take in oxygen when you inhale and release carbon dioxide when you exhale.
Lung cancer is the leading cause of cancer deaths worldwide.
People who smoke have the greatest risk of lung cancer, though lung cancer can also occur in people who have never smoked. The risk of lung cancer increases with the length of time and number of cigarettes you've smoked. If you quit smoking, even after smoking for many years, you can significantly reduce your chances of developing lung cancer.

How smoking causes lung cancer
Doctors believe smoking causes lung cancer by damaging the cells that line the lungs. When you inhale cigarette smoke, which is full of cancer-causing substances (carcinogens), changes in the lung tissue begin almost immediately.
At first your body may be able to repair this damage. But with each repeated exposure, normal cells that line your lungs are increasingly damaged. Over time, the damage causes cells to act abnormally and eventually cancer may develop. 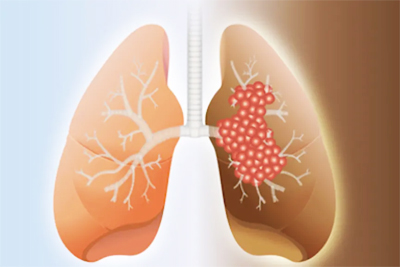